Create a drawing depicting a creative vision inspired by your culture, heritage, or close relationship. Answer the question: How can I use the elements of art to create a cultural vision? 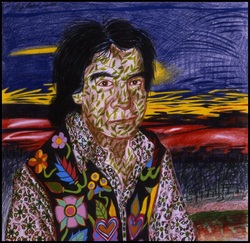 "Frank Big Bear grew up on and around the White Earth Reservation. He has lived in Minneapolis since 1968. For decades, Big Bear drove cab while raising his family and creating his art. He received the 2008 Bush Foundation Enduring Vision Award as well as the Bush Artist Fellowship Award in 1998 and 1986. He has shown at the Tweed Museum, Duluth; Museum of Contemporary Native Arts, Santa Fe; The Plains Art Museum, Fargo; Weisman Art Museum, Minneapolis.

His detailed and vibrant colored pencil drawings depict fantastic figures in wild and disjointed scenes. Big Bear is enormously prolific and paints as well, creating stylized portraits often composed of the same colored shapes in mosaic that mark his style in both mediums. The humans, animals, and supernatural figures in Big Bear’s art portray a world teeming with activity and intent. Honed over decades, his personal vision and artistic commitment are revealed in every work."  -www.bockleygallery.com

Quote from the Artist
“For a long time, I might be drawing some scene from history, and my father's face would appear. After he died in 1992, that image disappeared. Now when I draw my daughters, it's almost like drawing myself,” he writes. “I think my portraits have a spiritual quality to them, but are also psychological profiles and hybrids of several people, including the artist.”

Over time, Artists draw inspiration from each others styles 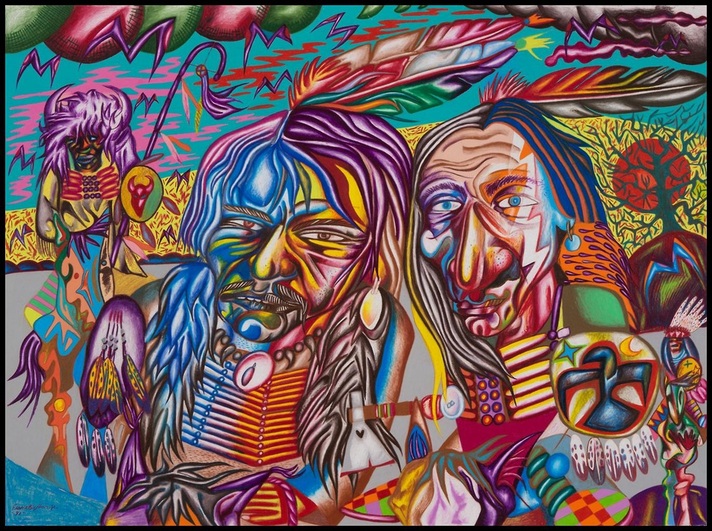 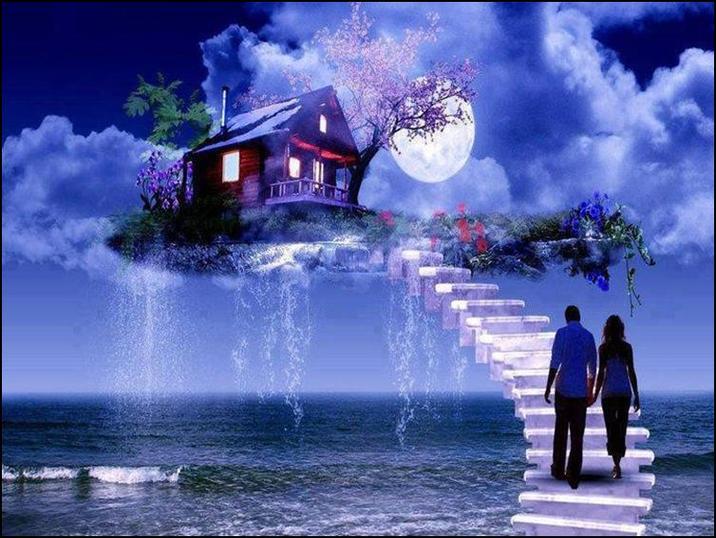 YARN PAINTINGS CONSIST OF COMMERCIAL YARN PRESSED INTO BOARDS COATED WITH WAX AND RESIN AND ARE DERIVED FROM A CEREMONIAL TABLET CALLED A NEIRIKA. "THE HUICHOL OF MEXICO, HOWEVER, USE IT TO "PAINT" SACRED IMAGES THAT ARE CONNECTED WITH THEIR SPIRITUAL LIFE. THE YARN PAINTINGS EVOLVED FROM MAKING IMAGES FROM FOUND OBJECTS (SHELLS, NUTS, TWIGS, ETC.) AND PRESSING THEM INTO A MIXTURE OF PINE RESIN AND BEESWAX. THE FIRST MAJOR EXHIBIT OF YARN PAINTINGS WAS HELD IN 1962 IN GUADALAJARA WITH SIMPLE IMAGES. SINCE THEN, ESPECIALLY HUICHOL WHO HAVE MIGRATED TO THE CITIES, THE TECHNIQUE HAS BEEN ELEVATED TO AN ELABORATE ART FORM WITH DISTINGUISHED ARTISTS SELLING THEIR WORK FOR SEVERAL HUNDREDS OF DOLLARS."
-FIBERFOCUS.BLOGSPOT.COM